In 1938, the Swiss chemist Albert Hofmann synthesized lysergic acid diethylamide, known as LSD for short. But it was not until April 19th, 1943 that he discovered the psychedelic effects of the substance originally intended to stimulate the central nervous system. This day of the first LSD trip ever is known today as the “Bicycle Day” in remembrance of Hofmann’s out-of-body experience during his ride home. 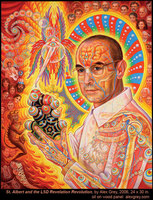 The serendipitous discovery of the substance and its distribution through the Swiss pharmaceutical company Sandoz in 1949 got the attention to scientists, government organizations as well as individuals such as the literary Aldous Huxley who published his famous book “Doors of Perception” in 1954. Huxley drew his experiences from a Mescalin trip with his wife in his house in Los Angeles during the Spring of 1952 under the supervision of the British psychiatrist, Humphry Osmond.

The original British cover of Doors of Perception

Dr. Osmond had started his research on the effects of LSD on alcoholics as early as 1950 – a development that paralleled research in the U.S. With prominent figures such as Timothy Leary conducting research through personal experimentation in the early 1960’s, the line between scientific research and recreational/spiritual use of LSD further deteriorated.

In June 28th, 1954 the Time Magazine issued the article “Medicine: Dream Stuff” about Huxley’s experiences and the potentials of hallucinogenic drugs. During the 1950’s and 1960’s the magazines Time and Life covered extensively and mostly favorably  – at times with a religious undertone, at times even in a style of advertisements – about LSD and thus popularized it immensely. Their perspectice coincided with the inclinations of co-founder of the magazines, Henry R. Luce and his wife, to LSD and their own personal experiences with the drug. 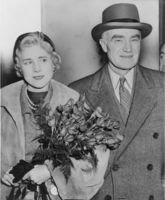 Clare Boothe and Henry R. Luce. Henry was the publisher who launched Time and Life magazines.

The “discovery”, distribution, and usage of psychedelic drugs resonated vividly in western culture as recorded acid trips of the Beatles, the Grateful Dead or Jefferson Airplane demonstrate. Heavily censored documents from the FBI go so far as to implicate the Grateful Dead in the trafficking of LSD. 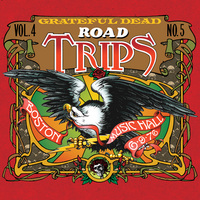 The idea of altering the mind not only echoed in creative and scientific communities but also fell on particularly fertile grounds within the military and the intelligence agencies. Following the U.S. insights into Nazi research (Operation Paperclip), McCarthyism and anxieties about Sino-Soviet mind control techniques the U.S. forces and agencies were eager to explore the limits of the mind using potential truth serums as well as other physical and mental means to constrain and force human individuals as well as animals. One of the early military projects is known as the U.S. Navy Project “Chatter” which was initiated as early as 1947 in order to investigate the effects of agents like LSD on soldiers during interrogation.