Religion played a crucial role in Cold War American culture. More than any other western country, the United States saw a remarkable increase in religious affiliation after World War II. Church membership rose from roughly 43 percent in 1920 to 82 percent in 1950 and 69 percent by the end of the 1950s, the highest it would ever be in the twentieth century. This rise in religiosity manifest not only as an increase in personal spirituality, but through an increase in religious involvement in politics, mental health, and the growth of religious sciences.

State policies aimed to create a religious citizenry as a safeguard against atheistic Communism. Religion became part of foreign propaganda, psychological warfare and public education. However, religion in Cold War America was by no means totally state controlled. The “religious free market” with its incentives for originality and competition was not suspended. Both aspects played a crucial role in controlling the mind of Cold War America. 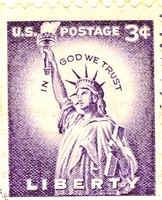 Religious Revival and Campaigns Against Communism

Revivalism and the Religious Right