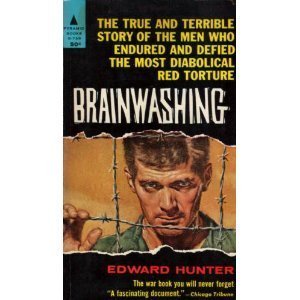 In 1950 Edward Hunter published the explosive book, Brainwashing in Red China. With his purple prose, he alerted Americans to the reeducation camps the Chinese Communists opened after their successful revolution. And with that title, he coined a term that would come to strike fear into millions and provide the terrified watchword for a generation. Scientists and psychologists may have discussed the possibility of thought control, but the word "brainwashing" -- with its simplicity and its snappy slang -- grabbed the American imagination immediately.

At the same moment, American soldiers captured in the Korean War and held by the Chinese in North Korean prison camps signed petitions calling for the war to end, made recordings pleading with their families to urge peace negotiations, and publicly confessed to dropping biological weapons on the North Koreans. Most shockingly, when the war finally ended in 1953 a handful of American soldiers stayed behind with their captors, swearing allegiance to Communism.

As news of these events reached home, Americans decided that Hunter had discovered the reason for these inexplicable acts -- the Communists could brainwash anyone in their control. If the All-American boys who fought for freedom could collapse under the pressure of this new, mysterious Communist tactic, then no one was safe.

As the prisoners returned, psychologists debated the veracity of brainwashing and military tribunals argued over whether to prosecute those potentially in its grip. But popular opinion was set: brainwashing was real, the prisoners were innocent victims, and everyone was at risk. From pop psychology to pop culture, with lightning speed "brainwashing" exploded into the American psyche and drove a national neurosis.